It is a great honor to stand here, once again, before the General Assembly and to congratulate António Guterres for having been appointed to serve a second term as Secretary-General.

As it happened five years ago, Portugal decided to submit his name for the position of Secretary General of the United Nations. For a simple reason: the strong conviction that António Guterres is particularly suited for the job and has lived up to the expectations.

No one could have foreseen, five years ago, the exact scale of the challenges that the world – and the UN – would be faced with. We all knew it would be challenging, we didn’t know just how much.

I dare to say that António Guterres has proved to be the right person, at the right time. The trust that you have once again placed on him today is solid evidence.

Mr. Guterres’ undaunted commitment to an effective and efficient multilateralism is complemented by something perhaps rarer and more precious: he is a compassionate multilateralist.

Knowing him for fifty five years, in common fights and then in opposite positions, Prime-Minister and opposition leader, knowing him, as you all do, by now, after his years as High Commissioner for Refugees, after his first term as Secretary General – we also know that, for him, putting people at the very center of his action is not just a choice, it’s an imperative. He continues the tradition of his illustrious predecessors who have embodied the spirit of the Charter: to lead the United Nations at the service of “we the peoples”.

We are facing times of even greater uncertainty, today. We all know – we all must know – that we cannot face them alone and that we cannot leave anyone behind.

Much has already been done since 2017:

We believe that the vision of António Guterres, his persistence, his boldness, his fairness and his solidary spirit will also be instrumental in the next five years.

Portugal is grateful to all the Nations united here, today, to reaffirm their trust in the candidate we put forward. This is an example, one of the countless examples, of the remarkable work you all do, here: an example that we can come together, we can overcome differences, we can agree and foster consensus. We can unite to serve our peoples. 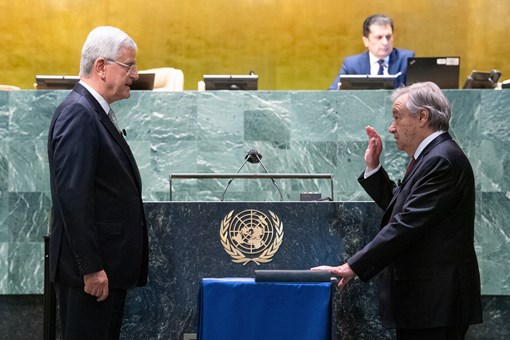